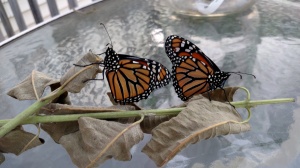 The pair of newly arrived monarchs

“Hating day?” I asked incredulously. “Why do you have ‘Hating Day’ marked on your calendar?”

“HATCHING day,” Sage explained with all the sanctimonious indignation a seven-year-old can muster. “That’s the day the butterfly will hatch out of its chrysalis.”

His father had found a fat monarch caterpillar on the road a couple of days before. After being ensconced in a jar with plenty of milkweed leaves, it had proceeded to form a J-shape, then turn into a chrysalis. Sage was using his extensive knowledge of entomology—mostly gleaned from the PBS show “Wild Kratts”—to calculate when the butterfly would emerge.

“Good calculating,” I told him, “Although the spelling could use some work. You might want to sneak a ‘CH’ onto your calendar before somebody gets the wrong idea about how we’re raising you.”

Fortunately, he obliged, and the addition of two miniscule letters made his calendar significantly less ominous. Unfortunately, the caterpillar never lived long enough to either hatch OR hate; it apparently died in the chrysalis and, although we could see the wings, no butterfly ever emerged.

Happily, two more caterpillars that Paul found a couple of days later did hatch, and Sage got his moments of innocent childhood wonder after all. 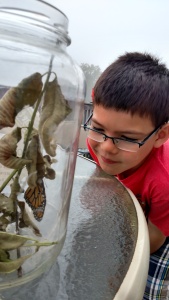 Sage lifts a milkweed stalk with the butterflies clinging to it. 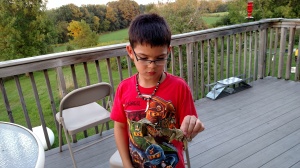 They sat on the milkweed stalk as Sage held it for quite awhile. 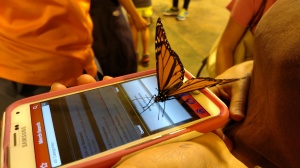 Apparently, even monarchs like Smart Phones. (This isn’t one of Sage’s monarchs–I took the picture in the Butterfly House at the Minnesota State Fair–but I found this image both relevant and slightly disconcerting.)