More Adventures In and Out of the Hive

After my older colony sent out its second swarm this summer, I decided it was time to take some action.

I hoped that rearranging the comb and giving the bees more building space would curb their intense swarminess. (There was an empty space at the end of the hive, but for some reason, the bees didn’t want to build there.) So I opened the hive and removed one comb, blackened with repeated use, that had a little honey and a lot of drones. As guilty as I felt about about my theft, I was amazed that I could watch baby drones chewing their way out of the cells as the comb was hanging. 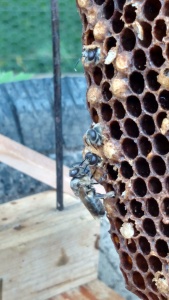 One infant drone seems to be cheering on his brothers as they chew their way out of their cells.

I also removed one honey comb, and my menfolk set to work squeezing out the honey. 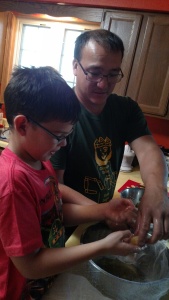 Sage and Paul squeeze honey out of the comb.

My plan didn’t quite work–the third swarm went forth the next day, and this time, it wasn’t as thoughtful as the first two, which had settled conveniently low in nearby trees. Although it was high in the apple tree, though, Barb and her family were able to retrieve the vagabond swarm and give it a home. (Thanks again, Barb!) 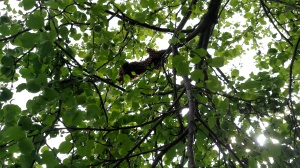 This rather inconsiderate swarm hangs out high in an apple tree.

Now, though, left to their own devices and placated with jars of sugar water, the colony seems to be happily eating and building. And my menfolk, now de-honeyed, got some quality hammock time. Happy humans and happy bees–the world is good.

Sage and Paul enjoy some quality reading time in the hammock.