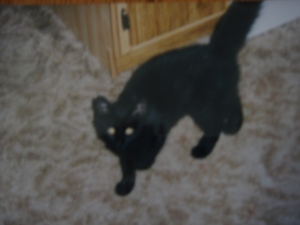 This is the only picture of Cadeau that I have.

As my grief for my dog Chaussette has calmed, I’ve had time to reflect on her role in my life. I’ve concluded that whether it’s attributable to God, Buddha, Allah, the Force, or just a desperate human attempt to find meaning in the random, there really WAS a reason for her brief sojourn with me.

I’ve already written about how vital she was in getting me through a year of increasing depression, when my fruitless quest for a job that paid well eroded my sense of self-worth. Her brief life was just long enough to see me through the worst of it. And, I realized, she wasn’t the first animal to do the same for me.

I was still afflicted with Wanderlust, though, so I became an AmeriCorps volunteer. My job was to help set up Girl Scout troops on the Fort Berthold Reservation in North Dakota; while there were already a couple out there, they consisted of mostly white girls. The directors of the Girl Scout Center in Minot felt that the Native girls were being underserved, and they wanted to develop more opportunities for them.

So I left Wisconsin, where I’d spent most of my life, and drove to North Dakota. I arrived in Minot and met the Girl Scout Center staff members, who were more than hospitable. Within a couple of days, though, I was on my own. There would be another volunteer working with me in New Town, but she wouldn’t arrive for another month. In the meantime, I had to live and work in a place that was well over an hour’s drive from the Girl Scout Center and the only people I knew in North Dakota.

Finding lodging in that area is virtually impossible now due to the fracking boom; even in 1999, though, it was difficult. The Girl Scout director had managed to find me an “efficiency apartment,” although I found out when I got there that the “apartment” part of that name was misleading.

My new home was in a trailer that had been divided into four rooms. Each room had a door with a small set of stairs and a miniscule wooden deck off it so that on nice days, you could squeeze a chair onto it and enjoy the view of the neighboring junkyard.

I hadn’t expected luxury, but this was a little more squalid than I’d imagined. Still, I was determined to make the best of it.

Days weren’t so bad; there was a little girl named Sprout who lived with her parents at one end of the trailer. When I wasn’t out on Girl Scout business, she would be my shadow. While sometimes demanding, she was good company and kept me from feeling too alone.

Nights were another matter, though. The people in the room next to me were partiers. My room was too small for any furniture besides a hide-a-bed and a table so, being too lazy to bother folding out the bed, I would lie on my couch and try desperately to sleep despite the pounding of the neighbors’ music and the smoke that was filling my room.

I generally failed. I was feeling increasingly frightened and lonely, and I was starting to regret my choice to come to North Dakota.

Then Cadeau appeared. This little black cat was sitting casually on my deck one day when I returned, looking as if she’d been waiting for me, and she followed me into my apartment with a typically feline air of entitlement. Just as Sprout was my companion by day, Cadeau (I named her the French word for “gift”) was my companion by night. She would lie on the couch with me, and her presence made the pounding and smoke endurable for me.

Thanks to Cadeau, I was able to stick out the month until my roommate arrived. The two of us had gotten lucky and were able to rent another trailer just feet away from my efficiency, so all I had to do was carry my things over.

I liked my roommate and her big black chow mix, aptly named Bear, right away. Unfortunately, Cadeau didn’t. She took one look at Bear and hurtled away. I laughed, thinking Cadeau would return once everything had settled down, and proceeded to complete my move. After all, I was only going a few feet; Cadeau would find me easily, and then she, Laurel, Bear, and I would establish a happy homestead.

I was wrong. I never saw Cadeau again.

I didn’t think much of her absence at first, but as the days passed, I searched for her with increasing urgency. There was nothing—nobody had seen her, and there was no sign of her presence. My gift cat was gone.

Laurel and I had a great year in New Town; we enjoyed our work and had more than a few adventures along the way. Better yet, I met the man who would later become my husband and father of my son.

Logic says that it’s just a coincidence, that I’m trying to finding meaning where there are just random events. But I just watched Life of Pi with my son, and a scene from that movie seems very apropos to my interpretation of Cadeau and Chaussette’s stories: After spinning a fantastic tale involving animals on a lifeboat, the narrator is obliged to supply a sad but plausible alternative account of his shipwreck. He asks the writer interviewing him which version he prefers and, after a moment of thought, the writer chooses the account with the animals. He says that it makes a better story.

And so it is for me. Maybe Chaussette and Cadeau were nothing but animals, but I choose to believe their presence in my life had a reason.

It makes a better story.

← A Formal Feeling
The arrival of Skipper →