An afternoon at Gessner

Paul reads to Sage from one of Grandma’s thousands of books.

Sage contemplates life (or at least glassware) in front of the living room window.

Sage is frequently enthralled by Grandma’s carousel, which rotates and plays music when you turn it on. 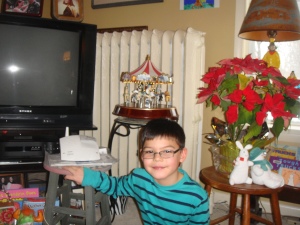 Sage smiles in front of the magical carousel. 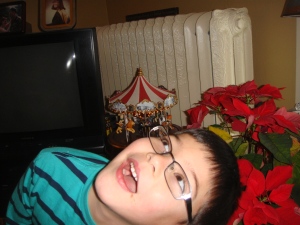 The carousel has apparently begun to lose its magic at this point.

Not all the time Sage spends at Grandma’s feet is for the purpose of receiving wisdom, as you can plainly see in this picture.

My grandma’s been struggling with a host of physical and emotional burdens lately, but she’s nothing if not determined; she’s returned to her home, a beautifully refurbished old farmhouse called Gessner after the road it’s on. Paul, Sage, and I went to visit her there last Sunday.

Visits to Gessner always give me the slightly disorienting feeling of living simultaneously in the moment and in a memory; Grandma’s living room is imbued with the scent of lavender and the golden glow of her many lamps. Her house is full of memories, both hers and mine, and every object has a story.

These are some of the images from that visit. I wish I could preserve all the scents, all the sounds, all the stories. I’ll never be able to, but at least I’ve made a start.