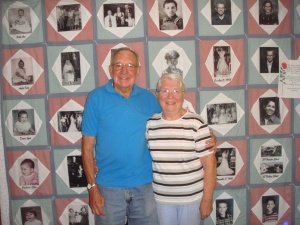 Eilert and Lois Honadel pose in front of the memory quilt their daughters made for them.

I have to confess that I almost said “no” when Rachel from the local newspaper forwarded me a request from the Aging and Disability Resource Center for an article on their upcoming caregiver conference. I’d been waiting almost two weeks to be paid for my August articles, and I’d never been paid for July’s; tired and cranky, I was in no mood to undertake another pro bono writing assignment. But the cause is good, and the topic is relevant–my father’s just become the caregiver for my grandma–and “no” tends to be a foreign word to me. So I grudgingly agreed to write the article, and I’m glad I did.

The first good surprise came when my contact person at the Aging and Disability Resource Center turned out to be the mom of one of my favorite students ever. But what came next truly moved me.

Sue took me to the home of Eilert and Lois Honadel so I could interview Eilert about being a caregiver for Lois, who suffers from Alzheimer’s. The word “heartwarming” is a cliche, I know, but Eilert’s selfless love and patient devotion to his wife really did produce an almost physical sensation of warmth. I came away from the interview both heartened and humbled; I had to question whether I would be capable of uncomplaining sacrifice on the magnitude of Eilert’s. Unfortunately, I’m thinking probably not, but it did me good to know that such a thing is possible.

Here’s the article I wrote; while the conference information is only relevant to people in this area, I think the Honadels’ story is worth sharing with people everywhere. I hope you enjoy it.

MANY RESOURCES ARE AVAILABLE FOR AUGUSTA FAMILY CAREGIVERS

Lois and Eilert Honadel knew there was something wrong when Lois got lost on a short and routine trip to her sister’s house. Although she eventually made it to her destination, she handed the truck keys to Eilert and said that she could no longer be trusted to drive. True to her word, she hasn’t driven a car from that day onward.

Ever since that incident, Lois and Eilert have been coping with the ever-worsening symptoms of Lois’s Alzheimer’s disease. The couple’s five daughters help as much as they can, but Eilert is his wife’s primary caregiver. Every day, he cooks, picks out her clothes, maintains the house, and administers her medication. Lois performs as many tasks as she can, such as vacuuming (sometimes, Eilert noted, doing the same room twice in a row), but she’s limited in what she can do since she often loses track of what she’s doing in the middle of doing it.

Even more stressful are Lois’s sudden and unpredictable mood shifts. “All at once, it’s like the page just turned over,” Eilert explained. “She gets these spells saying ‘I want to go home. This isn’t my house.’ Her mind just goes back” to the house in which the couple had previously lived. “Her memory’s always getting worse.”

Despite the stress, Eilert’s love for Lois is as strong as it was when they married in 1960, and he shows it in his daily devotion to her well-being. The two are both accomplished craftspeople—Lois creates intricate embroidery, and Eilert is an expert at crochet and woodworking. “I try to keep her busy embroidering and everything,” he said. He sometimes adds a crocheted border to her embroidered pillowcases, symbols of a union that even her debilitating disease can’t sunder.

Eilert can also comfort Lois simply with his presence: “I’ve got to hold her right hand, and then she’ll go to sleep,” he said.

As devoted as Eilert is, his burden is a heavy one, and he’s not alone in bearing it; over 65 million Americans are caregivers for elderly and/or disabled loved ones. Caregivers face significant physical, mental, and financial stress in the course of fulfilling their duties, and the stress often takes a toll on their own health. “Caregiving is one of the most difficult and sometimes thankless jobs there is,” said Sue O’Branovich of the Aging and Disability Resource Center, “but it’s born out of love.”

Love goes far in sustaining Eilert as he cares for his wife; however, he’s also wise enough to use the opportunities provided by the Aging and Disability Resource Center. He attends Coffee and Conversation, a chance for caregivers like him to discuss their concerns and share ideas. The group meets every second Wednesday at Unity Bank in Augusta (207 W. Lincoln Street). The meetings begin at 1:30 p.m. and feature free coffee and cookies as well as caregiver support.

Eilert also plans to attend the upcoming Caring for the Caregiver conference. The conference will take place on October 4, 2013, at the Fellowship Hall behind the First Baptist Church in Augusta (218 W. Lincoln St.). Running from 11:00 a.m. to 3:45 p.m., the conference will feature a variety of energizing presentations, resource exhibits, door prizes, and a lunch catered by Sweet Clarisse. Its goal is to “inspire and support caregivers and give them strategies for coping with their situations,” said O’Branovich.

She went on to explain that the Caring for the Caregiver conference is free, and respite care will be provided by Home Instead Senior Care. “There will be people here who can keep [those being cared for] occupied while caregivers learn and enjoy themselves,” she said.

As for Lois and Eilert, their love story has spanned more than fifty years and continues unabated. The couple first met when teen-aged Lois was playing organ for a church wedding. She needed a ride to the dance, and Eilert chivalrously offered her one. Eilert’s chivalry was well rewarded: “We’ve been together ever since,” he said.