Grandma holds the baby for the first time as my brother and little sister look on.

My 93-year-old grandmother just met her just-shy-of-six-month-old great-granddaughter for the first time. Grandma’s been too weakened by health problems to travel–particularly after staying several days in the hospital recently–so my brother, his wife, and their baby made the 6 hour trek north from Chicago. Grandma had been looking wan lately, but not on Sunday; her face was glowing as she held the baby for the first time. Despite my brother and sister-in-law’s reassurances that the baby was fine and the trip relatively painless, it can’t have been easy to travel that long with an infant. As you can see in the photos, though, their sacrifice was not in vain. 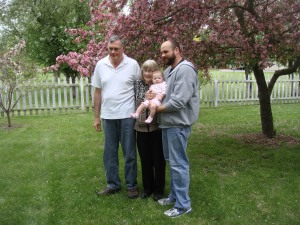 Four generations stand beneath a spring-blooming apple tree; if this isn’t a metaphor for the continuity of life, I don’t know what is!

← The Interlude
The Mystery Mouse →